"You are unique - and so is your treatment"

We received good news for one of our patients and are happy to share these with you on Bruce’s behalf.

Bruce was diagnosed in May 2013 with stage IIIC malignant melanoma of his right foot with a micrometastastic disease in 1/7 lymph nodes from the right popliteal and groin area.

In July of the same year, a dissection took place and Bruce decided to not receive the adjuvant interferon treatment, before he underwent a new biopsy in October 2013, confirming progressive disease. A few of the skin metastases were resected, and he underwent hyperthermic limb perfusion therapy. Unfortunately, in February 2014, the disease progressed even further. Analysis of Bruce’s tumor biopsy showed a BRAF-V600E mutation. So he started on the BRAF/MEK inhibitor dabrafenib and trametinib, which he took for nearly a year and a half. In July 2015, a restaging scan was unfortunately suggestive of disease progression, so Bruce started checkpoint-antibody treatment with nivolumab. Unfortunately, three months under this treatment, Bruce developed a grade III colitis (inflammation of the colon), that needed to be treated with corticosteroids. Disappointingly, Bruce was no longer able to continue the treatment. Once he fully recovered, he started on vemurafenib and cobimetinib (a different BRAF/MEK-inhibitor) treatment in January 2016, and searched for further options - and contacted our team at the Hallwang clinic.

At the Hallwang Clinic, we started with a thorough diagnostic approach and first screened Bruce’s tumor tissue for tumor associated antigens in order to identify potential therapeutic targets. Bruce’s tumor tissue was tested positive for expression of Melan-A and Survivin. When Bruce visited us in April 2016 for the first time, we discussed a treatment with a so called trifunctional antibody approach – targeting anti-GD2. GD2 is a marker which is expressed on tumors of neuroectodermal origin, and thus often found in melanoma patients, as well as in patients with neuroblastoma and different kinds of sarcomas. To evaluate Bruce’s eligibility for this treatment, a blood analysis for circulating-GD2 positive cells was performed, showing that his tumor was highly GD2-positive (3+).

Having completed all diagnostic steps and after careful evaluation, Bruce started on a combined immunotherapeutic approach targeting TAA’s in combination with anti-GD2 treatment and the BRAF/MEK-inhibitor. Since then, Bruce is visiting us every three months for three days, continuing his treatment strategy. Bruce has now achieved and maintained a “no evidence of disease“ status (NED) for about 2 and 1/2 years now, and 5 years since diagnosis!! We are so happy for you, Bruce! Continue on this path! 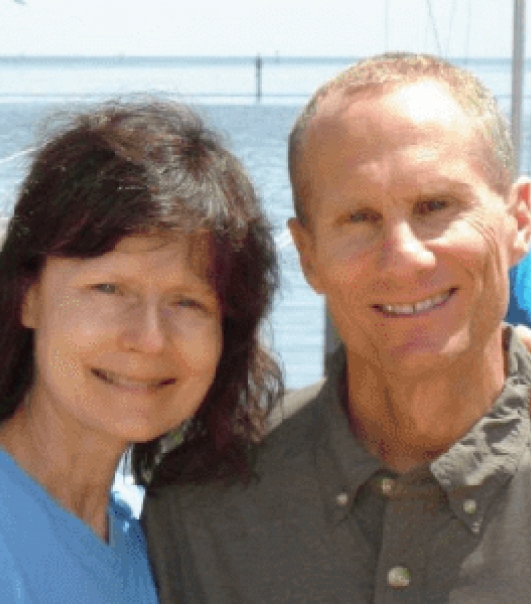 My name is Paul Thomas-Peter, I'm 59 years old and from the UK. In early 2014 I was diagnosed with squamous cell carcinoma of the skin on my right temple. It was removed and I was assured that it rarely spread. Later that year I found tiny lumps near my right ear, they were removed and it was confirmed that my cancer had metastasised. I went on to have a partial neck dissection to remove all the lymph nodes and the parotid gland in the right side of my neck. I then had 35 days of radiotherapy combined with two doses of platinum based chemotherapy. My treatment ended in November 2014 and I was told there was a good chance of a cure.

In March 2015 the results of a CT scan showed that despite the treatment, my cancer had spread to the mediastinal lymph nodes in my chest. I was told it would continue spreading, it was terminal and no further treatment other than palliative care was available.

I have never accepted that nothing could be done, I tried a number of natural therapies including changing my diet, details are in my blog: www.tryingtobeatcancer.org.uk This seemed to slow down the rate of spread but never stopped it.

My wife Helen and I continued looking at possible treatments and in late 2016 read about immunotherapy. We found that it had shown remarkable results in cases of my cancer and similar cancers. We discussed the possibility of receiving immunotherapy with our oncologist in York and had a second opinion at the Royal Marsden hospital in London. Essentially, although the drugs we wanted had been approved for use within the NHS they were not approved for my specific cancer, so I couldn't be given them even if I paid for them myself. The attitude of the NHS to immunotherapy was negative and it didn't seem that the people we spoke to had much knowledge about it.

In January 2017 we read an article in The Sunday Times about people funding their treatment abroad and this article mentioned The Hallwang Clinic. We contacted them immediately, had my diagnosis and previous scan results sent to them and they were positive about my prospects. They insisted on testing my tissue samples before committing to a treatment plan which reassured me of their professionalism and knowledge. They phoned me at home after the tests were complete, explained what had been found and explained what treatment they felt I should receive, noting that it had an excellent chance of success. It was a breath of fresh air to be spoken to as an adult and have things explained rather than being treated like a 6 year old who wouldn't understand.. I felt they were on my side, trying to cure me and would do their utmost to do so. I have to admit I was in tears after the phone call, I had hope again.

We attended the Hallwang Clinic in early March 2017. By this time I had survived 6 months longer than my NHS oncologist's outside prognosis but I had gone downhill rapidly during January and February 2017. I believe that in early March 2017 I only had weeks to live, I was short of breath, had difficulty walking for any reasonable distances and had developed a terrible cough due to the tumours in my chest. The doctors and staff at the Hallwang were incredible, they treated me like an adult and it was clear they had my best interest at heart.

I had my treatment and the reasons for deciding on it explained in some detail which gave me confidence in it as I like to know what is happening. I was treated with different immunotherapy drugs, together with a personalised combination of treatments aimed at what my specific cancer was doing inside my body. Because of how ill I was, I was also put on a short course of antibiotics and also a low dose of chemotherapy in tablet form to prevent my condition worsening before the immunotherapy treatment began to work. I also had a PET CT scan so that we knew exactly where we stood and can measure the effects of the treatment. 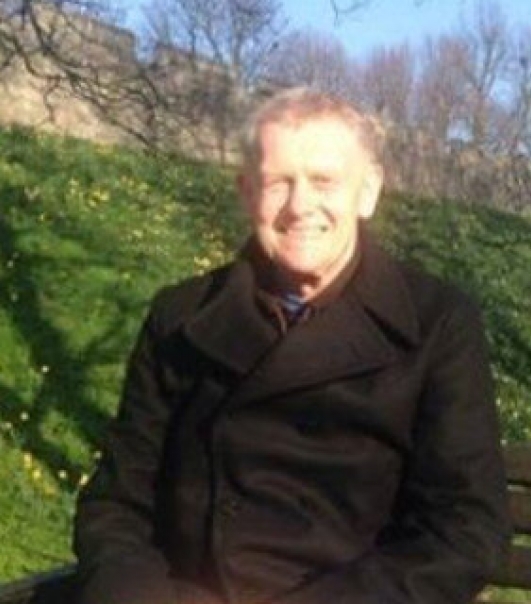 This approach is something I would never have received from the NHS or any medical facility in the UK whether I paid for it or not. It is leading edge treatment, but well documented not experimental, it is personalised to me and my cancer. The facilities at the Hallwang Clinic are excellent as well; the rooms are clean, spacious and well equipped, the food is excellent and the atmosphere is positive. The facilities allow for relatives to stay with you and there is 24 hour medical cover although I haven't needed it thankfully. The treatment began to work within 3 weeks, which is earlier than expected. Tumours visible on and in my body began to disappear, some overnight. I had an examination by my NHS oncologist who was surprised by the results but critical of the treatment.

After 12 weeks of treatment at 3 weekly intervals a recent scan showed all my tumours had disappeared or reduced in size significantly. I am certain I am on the road to full remission. I have suffered very limited side effects and now have an excellent quality of life. The treatment is not cheap but we consider it money well spent, I would be dead now without this treatment, my recovery to date is like a miracle. From here, we move forward into largely uncharted territory, this is new treatment so there is limited information about long term survival. However, I am confident that I am not now going to die in the near future and if I only get a year or two of good quality life it will be more than worth it to my wife and I.

We would like to share with you another story highlighting the impact of treatment with anti-GD-2, a trifunctional antibody, one of the latest members of the trifunctional Ab platform. One of our patients (male, 58 yrs old) was diagnosed with melanoma and metastases to the liver, bone, spleen, lung and peritoneum. He was previously treated with chemotherapy, sorafenib, hyperthermia and dendritic cell vaccine. At the clinic, he received Anti-GD-2 treatment for 6 weeks, side effects were mild and well controlled. 10 weeks after, a PET scan was performed and already showed remarkable reduction of metastases, see images below. Anti-GD-2 treatment can be applied in many different solid tumors and can induce a therapeutic vaccination (see diagram). 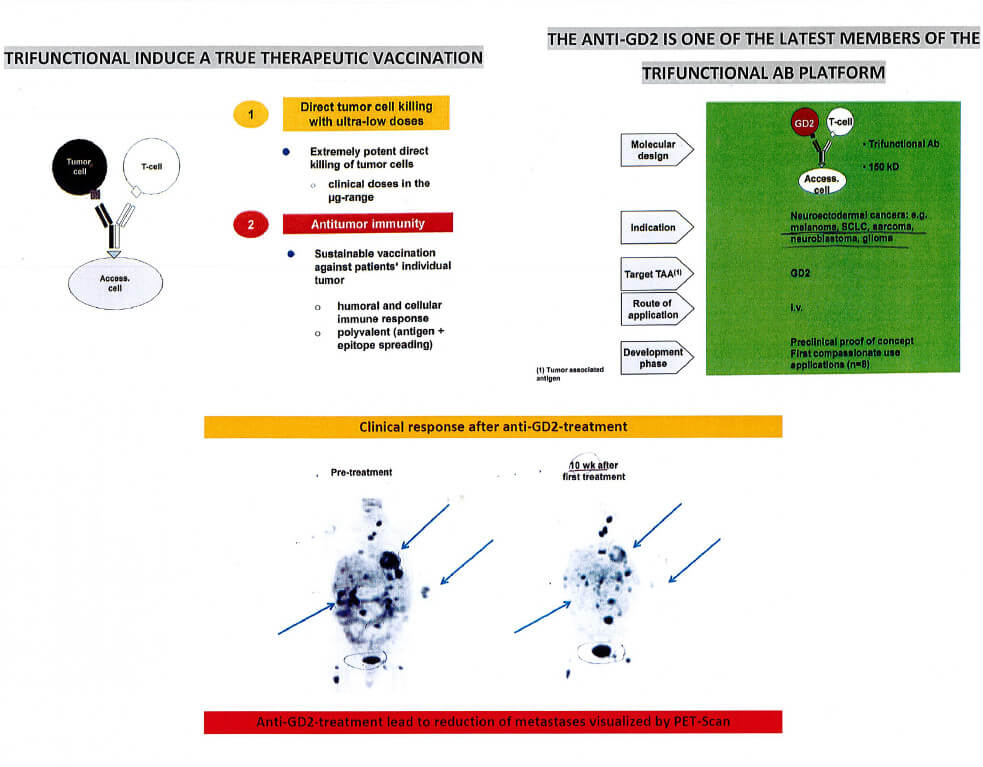 We would like to share with you a comment in regard to the corona virus pandemia. Due to the current events, more information should be highlighted relating to our field of medicine 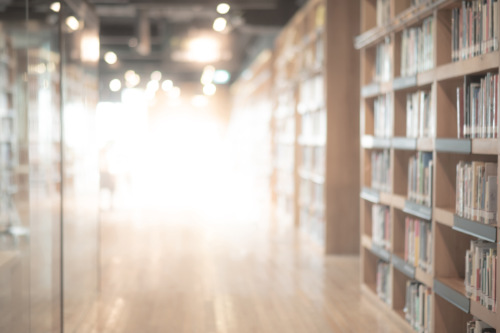